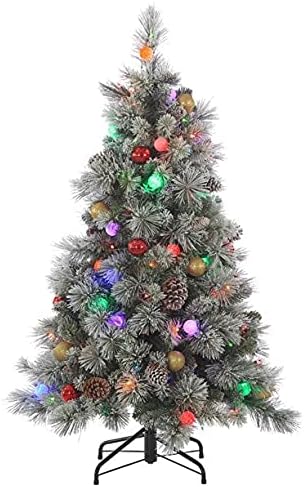 About this item Product details Sterling A classic combination of tradition and technology, this multi-colored, LED-illuminated Pine Christmas tree with realistic-looking pine cones and shatterproof ornaments will beautifully light up your whole holiday season! A shapely height of 4.5-feet skirts down to a base width of 33 inches, this gorgeous Pine comes pre-strung with 100 UL-Listed multi-color incandescent bulbs and 50 UL-Listed, G40 multi-colored and energy efficient LED lights. 466 Pine tips stand ready to proudly display your favorite ornaments and heirlooms and the Pine is supported by a sturdy 18-inch, 4-prong metal stand for safety and stability while still leaving plenty of room for presents from Santa. Sterling Prelit LED Green Flocked Pine Christmas Tree, 4.5' Assembled Tree Dimensions: 33InL by 33InW by 54InH Pre-Strung with 150 Multi-Color LED, G40 lights; Replacement Bulbs Included Equipped with 466 branch tips to show off your favorite ornaments and decorations Includes 18-Inch Diameter Metal Four Prong Stand for Stability in any Environment Operates by White 72" Lead Cord Allowing Versatility in Placement Tree is UL-Listed and Fire Resistant for Safety.

9-month hands-on FILM ONLY program. Financial aid for those who qualify (FAFSA).

All Film All Day

We believe in getting our students totally immersed in the film industry and eliminating distractions. We provide the fast track, avoiding unrelated topics and useless credit hours. We get our students out of the traditional classroom, in the field, on set, and behind the camera. It’s hands-on creativity every single day.

At NFI, you’ll learn relevant skills, network with film industry professionals and leave prepared to start your career! In fact, 74%* of our students find jobs in the field upon graduation * Source: THEC

At the NFI, all of our faculty are actively involved in the film industry. They’re producers, writers, editors, actors, stylists, and more. This provides our students with rich perspectives on trends and technology, exposure to an active network of professionals, and real-world mentoring.
Play
Play
Play
Play
Previous
Next

Some words from our Alumni & Parents

“NFI secured a project that was being filmed in Nashville. I met the line producer, and that was my intro to legitimate filmmaking!” Eckels

In 2021, Eckels had the opportunity to work as a camera operator on the Film American Siege starring Bruce Willis. His strong work ethic and talent combined with the demands of film resulted in Eckels being promoted to 2nd Unit cinematographer.

Eckels seized this opportunity to shine and has now shot 5 more feature films as a camera operator or 2nd Unit cinematographer (including 4 with Bruce Willis and 1 with Mel Gibson). He is now slated to be the primary cinematographer on a television show shooting this winter and a feature film shooting January of 2022.